Construction Insolvency is Down… But is That a Good Thing?

All the figures I’m seeing are suggesting that insolvency in the construction industry, and generally, is way down despite the massive negative financial impact of COVID-19 on the economy.

It’s tempting to say that this is a glorious positive note in an otherwise nightmarish situation. We might conclude that government stimulus has been successful at helping businesses hold themselves together despite their customers staying home with their wallets.

Unfortunately, negative though it sounds, many believe that this is the calm before the storm. Once certain key elements align, there’s every chance we’re going to see a swathe of companies falling into external administration in a short span of time.

We obviously hope that isn’t what happens, but the only sensible approach to business right now is to hope for the best and prepare for the worst.

The Glue That’s Holding Things Together

While the financial handouts have certainly been welcome and needed by many, I’d speculate that these aren’t really the main contributors to the decreased insolvency figures.

Most likely we’re seeing fewer appointments and liquidations because of the changes that:

You can read about those measures here.

The Glue at Work

Here are some lovely graphs, showing that generally (and specifically in the construction industry) insolvency appointments are down. Not just a little down, but WAY down. 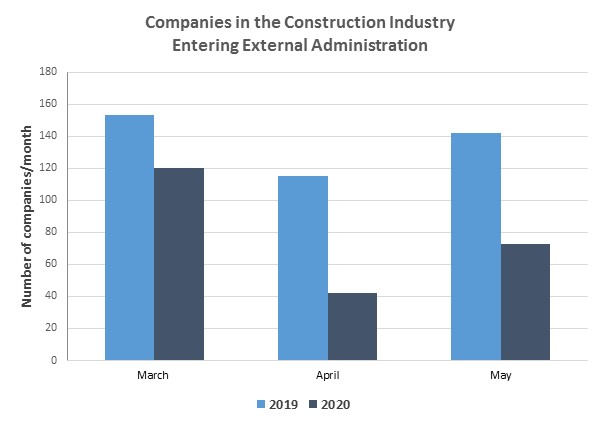 So the question of the moment is: are these figures a good thing, or just the first part of a scary movie when everyone’s happy and the creepy music hasn’t started yet?

I don’t want to plunge too deeply down a political rabbit-hole here, but in times of perceived economic crises an inevitable battle begins between:

The end responsibility for those decisions rest on other shoulders though, for which I’m grateful.

But there is a big tension, and it has real world consequences (for you and I, for your business and mine) if it turns out that ATTEMPTING to save a business through this kind of system and FAILING to do so actually has far worse consequences than simply cutting off the life support earlier would have.

Why should we Care?

Let’s say your construction business is doing just fine – sure there was a slow-down in your pipeline for a time, but contracts are now being prepared and things are looking up. Why should you care about all of this?

It’s about managing your risk.

Time and again in the construction industry we have seen the house of cards come tumbling down very quickly, as one player in a project collapses the everyone else feels the flow-on effects.

The decisions you are making now about who to deal with and how to deal with them need to be scrutinised closely, to ensure that they can deliver what’s being promised. Because what happens to you (and what will it cost) if a:

We’d like to think that these things won’t happen, but they probably will.

Of course these situations have always been a risk for the industry. Now is a little different though, because now we’re going to find some companies collapsing faster and harder than before simply because creditors have been prevented from taking the usual collection steps on their debts for 6 months.

So what can you do about it?

Managing Your Risk As the Stimulus Ends

We’re not going to suggest that businesses which became eligible for JobKeeper are automatically in the kind of financial difficulty we’re talking about – certainly a lot of perfectly sound businesses still experienced sufficient economic impact where they availed themselves of the JobKeeper program.

The big picture recommendation from our end is to understand who you’re dealing with, what their situation is, and whether alarm bells should be ringing.

The problem is that you don’t always have the kind of visibility you need on everyone you deal with to make full informed decisions, and so you need to look for signs of financial distress rather than just waiting for “the call”. That might involve, for example asking questions like this:

Most importantly, if you have significant concerns then don’t just wait for the inevitable. Get advice on what steps you might be able to take (and what steps you can’t!) to protect your interests as much as possible.

If you need a hand then reach out and we’d be happy to help.

Enter your details to receive the latest news, regular updates and invitations to events.